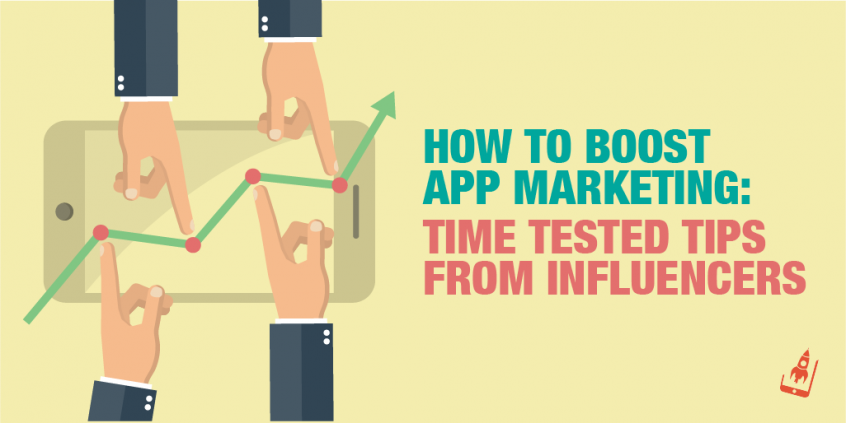 Some day an app developer battles app-marketing and another day he’s aimed at improving user ratings in the App store. Clearly, it isn’t a smooth ride and one cannot be satiated enough with the knowledge pool that surrounds this topic.

As an app developer, what’s the source of your mobile app-marketing dope?

Is it a blog, a tech weekly, social media channels or something else? The important question being the authenticity and reliability of such content.

Quite interestingly, we often look up to things stated by influencers. Not only are they authentic and reliable, but they are time-tested, actionable and always pack a punch. Imagine the likes of Neil Patel or Hiten Shah. Aren’t we in awe of everything that they preach or recommend?

Thankfully, mobile app marketing has its own set of influencers.

In this article, we have tried to introduce six eminent names in the mobile marketing industry, alongside their take on handling various challenges faced by app developers.

Want To Make Your App Go Viral? A Few Tips From Rameet Chawla

Rameet is the force behind the award-winning mobile app development company named Fueled. Having developed numerous apps for giants like American Express and Coca-Cola, Rameet understands what happens in the green room of app marketing. Being a risk taker himself, Rameet has also experimented with apps at a personal level, apart from providing professional assistance to various brands. One of his experiments has been quoted in the New York Times!

Keen to see the product that was created by Rameet and got blocked by Instagram? Click here!

In a recent podcast by the Founder’s magazine, Rameet spoke with Nathan Chan on the topic of making an app go viral. In this podcast, Rameet has shared his vision on building an MVP, along with tips on user onboarding for apps. This podcast also lists analytics tools and metrics that every app developers should know.

In an interview (not long ago) with Mashable, Rameet said: Wondering How To Improve User Ratings? Tips From Robi Ganguly

Robi Ganguly is the co-founder of Apptentive– a SaaS product that helps app developers in nailing user ratings, without being naggy. Apptentive has been behind the success of apps like UrbanSpoon, AllRecipes and Credit Sesame.

It isn’t surprising that Robi has a strong foothold when it comes to improving user ratings, a pain area for most app developers. A big part of favorable ratings deal with handling user feedback and negative sentiments.

Robi has listed actionable tips on how to convert app haters into evangelists in a recent article. Robi states that: Bayram Annakov is the CEO of App In The Air, a hugely popular app that tracks flights. Being a mobile growth hacker, Bayram has a penchant for app growth. Having scaled his app to over 1 million users he has clear insights on metrics that matter.

It is often seen that app developers aren’t well versed with the right tools and analytics to monitor their app’s growth. This lack of knowledge also impacts their overall marketing strategy. Having faced a similar challenge, Bayram has shared his views in this amazing podcast.

Listen to the podcast here:

If you want to dig deep into the world of mobile growth hacks, don’t miss this video featuring Bayram as a speaker

There’s always a sensible way of implementing an app marketing strategy. The irony is that most app developers suck at it.

He is a regular contributor to notable publications like Entrepreneur, The Next Web, and Huffington Post to name a few. His tips on app marketing are appealing and have an effortless flavor to them.

Rahul understands the challenge associated with mobile marketing and augmenting app downloads. He goes on to say:

“Driving mobile app downloads is far harder than building the product. That’s a fact and we have to live with it.”

Rahul has pioneered an exclusive program that is focussed on boosting mobile app downloads through growth hacking. Here’s a glimpse of a few topics that are covered in this program and will help you master mobile marketing hurdles as a whole.

Steve Young is the founder and the CEO of AppMasters, a platform dedicated to Indie developers. He also runs a very successful podcast, that found a mention in our curated list. Apart from this, he also runs a successful agency that deals with mobile app promotion.

Clueless On How To Use Paid User Acquisition To Increase App Downloads? Let Andrew Hubbard Teach You How!

Andrew Hubbard is an Indie developer and has developed over 100 apps till date. While developing these apps, Andrew dabbled with paid user acquisition, a lot of which was to do with Facebook ads. It isn’t surprising that Andrew is an authority when it comes growing an app using Facebook ads, during the various stage of an app’s lifecycle.

If you are a beginner who wants to dabble into this segment, you may want to look at the podcast  where Andrew discusses this topic at length.

With millions of options available to the app developer, he’s definitely spoilt for choice. I’ve known a few from the community who start their day by scouting through this vast knowledge pool, often pushing them to Feedly or Pocket. Lack of time is always an excuse for us!

However, there’s always a shortcut for things. This post with cherry picked content is our way of leveling up friction between the app developers and the right source of information.

Which mobile marketing influencers do you look up to? What’s been the best piece of advice that you received from them so far?

Are there any names that you wish were a part of the list, but were missed by us? Do drop in your comments below!