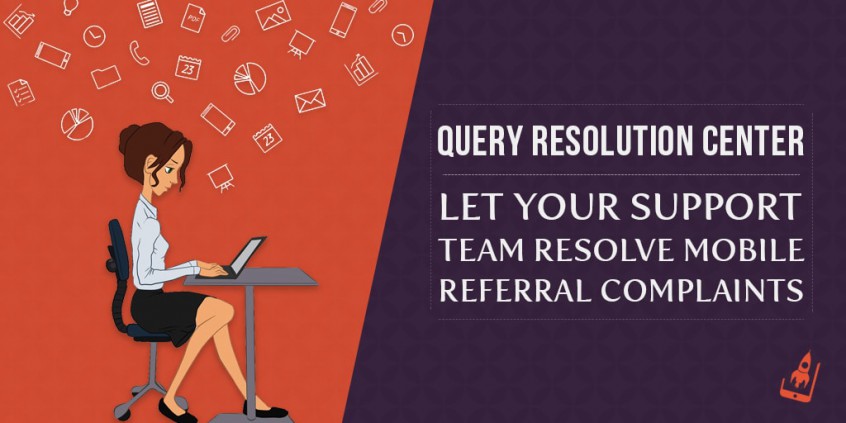 Unfulfilled promises concerning referrals, especially in the app world can drown your brand’s image. That’s because the key ingredient of a referral campaign is the trust associated with it. Most users act on a referral link or code because it was shared by a trusted friend or family member.

Most marketers do not factor the aftermath that follows unanswered queries associated with their mobile referral campaigns. In the absence of clarity, support teams either ignore these questions by customers or are continually dependent on the tech team to provide them with genuine answers. Such a chase usually ends in a no answer too.

Numerous app players have lost credibility in the mind of the user’s owing to unresolved user queries. While marketers can’t do much in such situations, users do not lose any chance of bringing the app down.

App store/ play store is a usual pit stop for angry app users. Quite often do we witness negative ratings for an app when the support staff fails to resolve queries for irate customers. Ride-hailing apps like Lyft and UBER have numerous  cases where their app received a bad review, owing to no response from the support team. Most users share their code/ referral link on social media platforms as opposed to E-mail and other channels. Given the social extension of these campaigns, even a minor glitch or a delay may lead to an uproar on such platforms.

To add to the misery users expect an answer almost instantly. According to a research done by Forrester the turn around time (TAT) for an email response is six hours and for social media driven responses the window is as low as half an hour.

This may impact your campaign and outcome in many ways.  Here are a few examples:

@AskLyft my has no idea what you are talking about he used my referral link and does not know anyone that drives with Lyft. SCAM = LYFT

Jump to your competitor’s side

Won't be using @lyft anymore didn't get referral credit when friend put in code. Bad customer service. Back to @Uber

While doing so, rub it in on to others

Create doubts in the mind of prospects

Oooohhh #Uber are doubling referral incentives. Is that because of the bad press of late? Or the sheer number of people who've been #ubered?

It’s true that customer service challenges won’t fade away, however by providing the support team with a competent tool growth managers can empower them. This will ensure smooth closure of queries and a sustained trust in your mobile referral campaign.

AppVirality Resolution Centre is our latest offering to strengthen a mobile referral campaign and is now live on our dashboard. Having supported mobile referral campaigns for over 150 apps, we realized the need for a holistic solution. Through this resolution center, we aim to reduce the turnaround time against open tickets as well as eradicate the dependence of support teams on tech teams for an answer.

The resolution center requires email address of both the referrer and the recipient for it to work, which can be easily provided by the support team.

Let’s me take you through various dispute scenarios and how our resolution center can empower your service team in obtaining a legit answer in no time!

Scenario1 : When The Attribution Is Successful

A successful attribution message confirms that both the referrer and the recipient were rewarded successfully.

Scenario 2: When The Referrer’s Email id Is Blocked

A recipient may not be able to avail the incentive when the referrer is barred. AppVirality offers a powerful fraud detection feature as a part of its offering. Therefore we are adept at identifying referrers who aim at gaming the system.

In such cases, the incentives aren’t released to the recipient. Support teams may not be adept at understanding the technological aspects of it, however by looking at our dashboard they can provide a concrete answer to recipients who have to suffer in such situations.

When the referrer email id is blocked, it gives a message saying “referrer is marked as blocked”.

A possibility, even though rare is when a recipient may click on a referral link/ code on one IP and continues to install the app on another IP. AppVirality identifies this as yet another attempt to game the system and therefore does not allow an incentive release.

“User not attributed. Click and Install were not on the same IP.”

Exclusions in case if your app supports Google install referrer or iOS9 cookies.

A mobile referral campaign has two ends. Sometimes a recipient may also be marked suspicious, when it is detected by our fraud mechanism system. In such scenarios, the display message reads as “Friend is marked as suspicious.”

Mobile referral incentives may have a threshold as decided by your team. In most scenarios such minute details aren’t shared with the support vertical, leading to a delay in response.

Such precise information helps the support team in pacifying an irate user effectively.

It may so happen that a referrer may share an incorrect referrer code or referral link. In such a scenario, attribution isn’t successful and the message is displayed as “Friend has not clicked the referral link or provided an invalid referrer code.”

Scenario 7: The App Is Already Installed On The Recipient’s Device

Very often it is observed that a recipient has the app already installed on their device, when they click on the link, yet they expect to be rewarded. In such a scenario, the message reads as “user not attributed.”

If you are running a mobile referral campaign, you need to be open to queries of your customers. It is as simple as that.

Clearly, “we will get back to you, shortly” does not cut it anymore. Teams need to reduce the “shortly” to “shorter” and it can’t be achieved without a dedicated and precise query resolution center. The scenarios discussed above are just the tip of the iceberg. There are numerous other scenarios that come into play.

What are a few mobile referral challenges that you support team has been facing? How do they deal with it? Do share your experiences in the comments below!