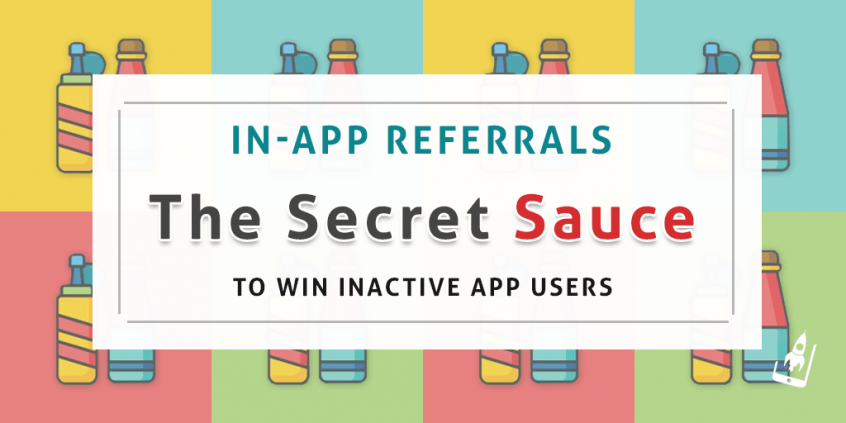 Ever imagined Burger King chicken fries minus their secret sauce? Chances are you won’t visit the place again if that goes missing! Just like most businesses, app marketers have often seen dipping their marketing efforts into their own secret concoction- the one that helped them attract users and grow.

App business is no different. This space is constantly booming, and marketers have to constantly up their game to enjoy user attention and loyalty. The absence of which leads to app abandonment or inactive users.

Andrew Chen has surprising insights into app user retention- a constant bottleneck for app growth. In one of his essays he has shared well-researched information on mobile retention numbers. According to him, an average app loses its entire user-base within a few months. This essay also lists an important observation by Ankit Jain-Founder of Quettra and also the co-author of this essay. He says In-app referrals is a tried and tested secret sauce behind the most promising and successful apps, such as Airbnb, UBER, Runkeeper and the likes. These apps leveraged the richness of word-of-mouth at various levels of their sales journey to stir delectable success stories!

In this article, we’ve tried to share our insights on how to use this strategy to revive inactive users. Along with this, we’ve stirred up some nifty ideas that work wonders when coupled with In-app referrals.

But before moving forward let’s understand the true value of an inactive user and why In-app referral is the best way to bring them back from the dead!

Why Are Dead Users Important?

Most app marketers don’t understand the real value of users that have churned and how to bring them back. Inactive users can be the biggest asset for an app.

That’s because they are the ones that once onboarded your app and stayed with it before they stopped using it. In a nutshell, they are your window to improvement and reducing churn in a big way.  Despite being aware of it, app marketers do not care to pursue them further, which in my opinion is a huge mistake.

The answer to winning inactive users may lie in the deft usage of In-app referrals.

Before we go ahead and discuss how it can help app marketers do so, let’s take a brief pause and understand why this is important.

Numerous studies support referral marketing, however, the one that stands out is done by the American Marketing Association. According to this report, the average value of a referred customer is 16% higher than that of a non-referred customer. The research also states that referred customers have a higher contribution margin and are more loyal and profitable in both short and long run.

In-app referral is a cheaper strategy

The latest Fiksu report highlights that the cost of acquiring an app user is constantly on the rise. In 2015,  it increased by 26% in a span of one month. By using a straightforward and time-tested technique like In-app referrals, app marketers can re-ignite the interest of its users, without wasting precious marketing dollars on fresh acquisition.

The most significant use of in-app referral lies in the way in which it positively affects the customer life-time value (CLTV).

Alex Waltz of Apptentive states that Having understood the power of In-app referrals, let’s deep dive and evaluate various ways of using it to win back inactive users!

Whether it is a sign-up, install or a transaction, app marketers tend to collect email address of prospective users at all levels. With crisp data filtration,  app marketers can reach out to inactive users and encourage them to participate in their ongoing referral program. An additional incentive along with the perks of an In-app referral can also work as a winning combination here.

The Pinkberry mobile app has a firm grasp on the behavior of its app users as well as analytics and sends a “we miss you” email to its users who haven’t been active on its app for a while. Here’s the complete story on how they personalized and made this a sweet moment for the user. #2- Push Notification To The Rescue

In-app referrals propelled by push notifications have the ability to charm inactive users like none other. According to a mobile marketing survey, 68 percent of consumers who have downloaded apps, have enabled the push notification feature. Among younger consumers (18-34-year-olds), it’s nearly 80 percent. This is good news for app marketers. While users may delete or choose to ignore your email, frequent push notifications create a recall and may force them to come back to your app.

Here’s a tip for app marketers. Don’t lose hope here. It may take a series of push notifications for inactive users to consider the offer, but with careful planning and attractive incentives, one can always turn the tables.

We’ve mentioned the benefits of seeking feedback from users and how NPS is a great tactic to do so. Ever imagined the situation when you were put off by a shoddy service, and there was no one to listen? Ya, that. There are a lot of users who may stop using your app because of a similar experience.

Using Net Promoter Score is a fantastic opportunity to make the first contact with such users. Once they have vented (in a way) their displeasure, app marketers can win their hearts by introducing a powerful way of earning incentives. A two-way approach will instill trust and referral incentives will keep them coming for more!

I love traveling in September and for the most part of the year, I’m a pretty inactive app user on the travel app of my choice. Just like me, there may be a plethora of users, who don’t hate your app but are seasonal in their approach. Re-targeting such users may be a tad tricky but season specific referral campaigns can get them back to the app a bit early. Here’s what MakeMyTrip app did recently, which of course caught my attention. Not only did I book my tickets early but also pumped it up by using their amazing in-app referral campaign.

In-app referral marketing isn’t just a growth hack. It is a concoction of ingredients making it a fiery answer to almost all the problem faced by app developers, including the revival of dead users.

What’s your secret sauce to winning the hearts of inactive users? Don’t forget to share your dope in the comments below.