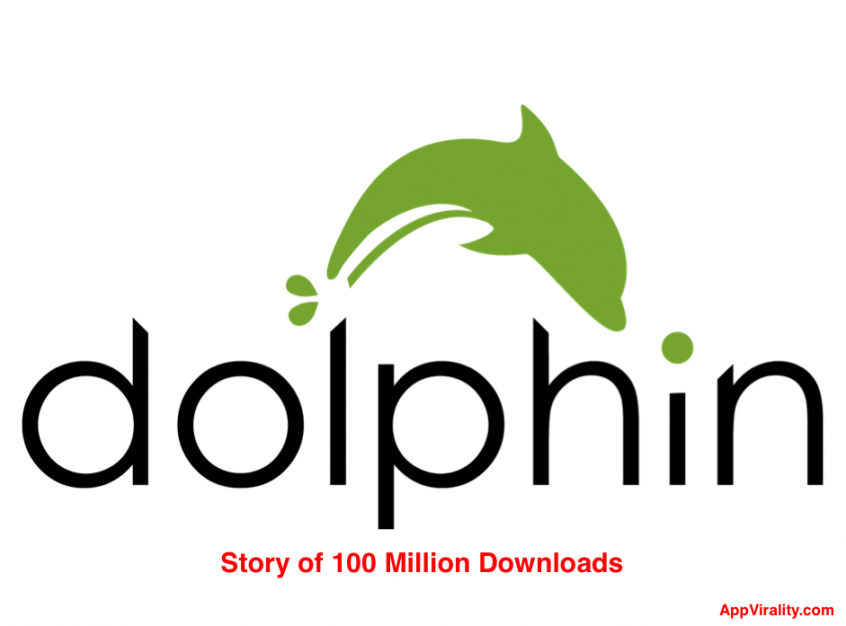 Web browsers for mobiles such as Firefox and Safari usually work well. They are designed to work for touch screen devices and as such they have some touch based features included in the app. However they do not exploit the touch features completely.

This is where Dolphin enters the scene. Dolphin was established in 2010 and was the first third party browser on Android. Today Dolphin has more than 100 million users worldwide.

In this article I want to focus on the growth hacking techniques they employed to grow their user base to such stupendous numbers and how you can use the same for your app growth.

Edith Yeung, the VP of International Business Development at Dolphin, wrote an article in Venture Beat about the growth hacking techniques Dolphin employed to grow. This article draws heavily from that.

Yeung doesn’t explain some things in detail like what exactly they did. Perhaps that’s due to privacy policies of the company. But she says that she learned some lessons in growth hacking while growing Dolphin and she has mentioned them in the article, albeit not specifically but too generally.

Dolphin had hit one million installs just through Google Play. That was because theirs is a fantastic web browser which is quite different from other web browsers.

There are some new innovative features in Dolphin that set it apart from others.

But Dolphin also gives you the option to create your own gestures. You can even change the existing gestures with the ones you want to use. You can create all new gestures for things like saving a page, clearing history, finding a word on the page, etc.

This gestures feature is one of the most important of them all. Dolphin has some other cool features too but such discussions are beyond the scope of this article. You may take a sneak peek here.

2) Mention in other publications

One fine day they noticed a huge number of people were downloading their app. They traced it back to an article which was a review of Dolphin. The impact of that article lasted for over one week. This made them understand the power of media coverage.

You can approach the influential bloggers and journalists of your niche and ask them to write an article for your app. This is not that difficult as many people imagine it to be.

Begin with some research.

Which blogs and journalists wrote about your competing apps? Which people write about the niche in which you have launched your app? Which are the most popular websites in your app’s niche? Which features of your app will appeal to them?

After you have prepared a list of some such people write them an email requesting to write about your app. If your email was short, polite, grammatically correct and to-the-point, chances are you will get a good response.

SEO is as important for the app market as it is for blogs and websites. Its Play store or App store optimization here. If your app is not discoverable how do you expect people to find it?

Use relevant keywords in the description of your app. For example if yours is a book app use words like “reading”, “books”, “ebooks”, etc. You could include some of them even in the app title.

You could spend some time researching the top notch apps in your niche to see which keywords are they using and how are they writing their description.

Ever heard of DSPs? No? Let me help.

DSP stands for Demand Side Platform.

A mobile DSP automates the process of match-making mobile ads with those mobile sites and apps which are the most appropriate for them. A mobile DSP brings together data from advertisers, publishers, ad tech companies and third parties so that it may give mobile ad buyers the best possible options of buying the right inventory for their clients.

Instead of going the traditional way, instead of buying blocks of inventory, the DSP evaluates every impression, as the mobile user opens a page on a mobile site or app. Then if that slot matches the requirements of the client, it is purchased, and hence the client’s ad is shown on the mobile device.

All this happens within a fraction of a second.

Now there are many DSPs with which you can work to drive more installs for your app. Depending upon the time of the year you will have to pay anywhere from $1 to $10 per install for US users. That may sound a lot to you but keep in mind that by 2015, the average revenue per user or ARPU is expected to hit $51. So you will still profit.

But you should only use DSPs when you are targeting the users who won’t just download your app but will also pay you by purchasing virtual goods like coins or by upgrading to premium packs. If you cannot research and identify who these potential high quality users are, Yeung says, you should not go this route.

5) Exchanges with other app owners

If you have a significant amount of users you can start contacting other app developers requesting each other’s promotion. But you should only partner with those apps which you know are good, are from reliable companies, and fall in the same niche as yours.

Of course if yours is an app about news and the other person’s is about fashion, you can’t promote his app to your users. It will annoy them.

Yeung says, “I’ve found the most effective way to drive installs is via push notification, internal messaging, or small banner and overlay ads (you usually have to pay for this).”

But since different strategies work for different people, see which one suits you.

I hope this article helps  you in your app marketing journey.