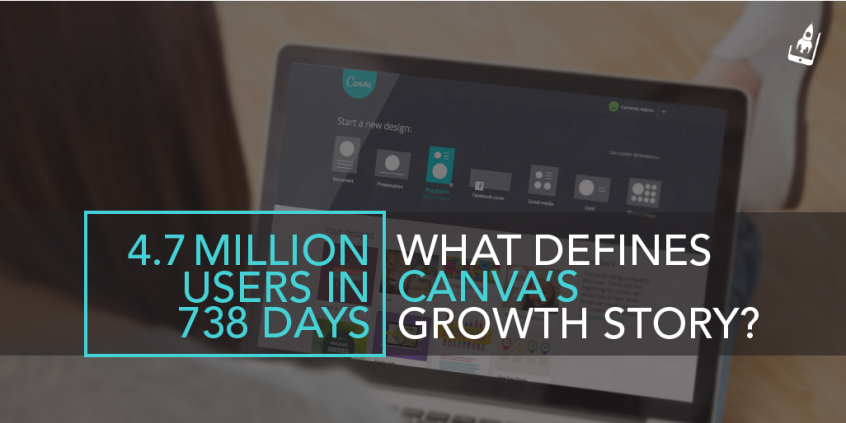 With worked up schedules, especially in a start-up ecosystem, we have become overly dependent on productivity tools of all kinds. Today, we have productivity tools for handling social media, content, CRM and even sales! Not only do these tools, simplify the tasks at hand, but they also do so in a jiffy.

One factor that has led to the popularity of these tools is the ease of its use. It’s not surprising that such tools became a part of a user’s arsenal quite quickly.

Canva is one such tool that stands tall in this coterie.Having been launched in August 2013, Canva has displayed exceptional traction in just two years of its existence.

Fast forward to 2015, no productivity list is complete without Canva!

At AppVirality,we love exploring products or brand stories that have shown tremendous growth potential. These analyses help us in understanding the evolving mind of a user, closely establishing a link between the factors that triggered its growth, alongside picking a few valuable lessons ourselves.

Here are the lessons that we learned from the accelerated growth of Canva.

Pardon my overuse of the word, but most fast paced start-up have literally “disrupted” their growth. That’s because, they stuck to moving fast and building on their way, rather than attempting a “perfect” product. Canva took almost a year to build a foundation for the product and spent endless hours on user testing. The main challenge was to create a product that would change the way people perceived designing. Enormous amounts of user testing data helped them in consciously improving the user journey. Canva started as a web-based service, as opposed to another desktop heavy software. It slowly offered users a “design button”, followed by an Ipad app. The strategy at Canva reflects an MVP approach, however, its recipe for success also includes two relevant keywords, namely- “valuable” and “validated.This is in line with the thoughts echoed by their Chief Evangelist -Guy Kawasaki, who goes on to say:

“You can create a product that’s viable, i.e. you could make money, but is it valuable in that it changes the world? Is your first product going to validate your vision? If it’s not, then why are we doing it?”

Lesson 2: Give power to the user. Invest in on-boarding

Canva’s user onboarding process is pretty nifty. That’s because it is end-to -end.

Canva users will readily accept the fact that this product empowers them. This mindset forms the spine of Canva. Most users shy away from designing/design, due to lack of skill or the right tools. Melanie Perkins, the co-founder, and the CEO states:

“Most people think they’re either “creative” or “non-creative.” I disagree. I believe there’s creativity in all of us, and with the right tools it can be unleashed.”

The enormous task was to break this myth and make the user journey more interactive. User testing (as mentioned earlier) had given them a lot of data points to improvise, but the real breakthrough for them were the series of initial challenges that they designed for their first time users. It served them two purposes: But, that’s not all. Canva integrated this approach with a robust customer service, with a response rate of 2 hrs!

That’s a remarkable TAT (turn around time)  given that a whopping 4.7 million users are hooked onto the product. Here’s a look at their early ticket status.

All this is followed up with dedicated newsletters that not only re-iterate these lessons but also, share fun ideas, video tutorials and highlight product features along with sharing a user’s milestone.

Imagine the glee on the face of a non-designer when they receive an email like this: Word of mouth is an excellent tactic, and we have discussed its benefits numerous time on this blog. The simplicity of Canva coupled with word-of-mouth soared its popularity immensely. Melanie Perkins puts it as:

“I often get asked which tactics we used to propel Canva’s early stages of growth. My answer is always the same. We didn’t focus on engineering virality, SEO, SEM, content marketing or any other marketing. We relied on the powerful momentum of word of mouth that was spurred by having a product that solved significant pain points for our users.”

Canva first launched in beta in August 2013, and since then has reached a growing number of over 4.7 million users. Can this growth be possible without growth hacking? In my opinion, a fast-forward growth needs hacking. It can be a minor tweak or an extensive ‘growth hacking’ strategy per se, but it is always there. The idea is to bring more customers to the table than a standard business route.

The team at Canva accepts that they haven’t really invested in Social media marketing extensively, a growth technique that is favorite amongst start-ups. However, what they have done is to intelligently integrate the “social sharing” element within its design platform. When a user is done saving a design, Canva pops up an option for them to share it with their social network. Canva also offers an inbuilt design stream that looks and feels like ‘Pinterest’. This stream displays images created by other users and serves the purpose of introducing non-designers to already created designs. The users can leave their comments, or favorites for a particular image and can also interact with fellow designers, making it seem like an in-house design team!

A gentle nudge like this has gone a long way in ascertaining growth for Canva. It is a way of telling users that it is indeed meant for people just like them. Canva’s growth hacks are not as visible as that of Airbnb or UBER, but they are still relevant considering that they push growth.

Lesson 5: Behind a great product lies a great team

Growth in a tech-startup is multifaceted. A lot is dependent on the core product, but a fast paced growth is possible only when there’s a robust team in place. This is important for various reasons.

Canva’s story also reflects the same thought process right from its inception. Even though Melanie Perkins and Cliff Obrecht had identified the need for a product, they still needed a tech co-founder with the right expertise to kick-start the initiative. Having a tech co-founder helped them in putting their thoughts into action.

Another great addition to their team happened in the form of Guy Kawasaki, who is their Chief Evangelist. This further propelled growth along with favorable interest from investors.

But why was all this important? Here’s the key takeaway here. To be able to succeed, a company’s vision needs to be sharp. With millions of users already hooked to their products, it was pertinent for Canva to be able to provide a world-class customer support and this wouldn’t have been possible with a boot-strapped attitude.

I’m sure that there are a lot of other factors that may have worked in combination or on an individual basis and made Canva a great product. However, here are a few key things that have been common between most successful growth stories:

What has been your experience with Canva? How has this tool helped you in your own growth? Do let us know in the comments below.